COVID-19 CVD RegistryTM Powered by Get with the Guidelines

De Lemos JA, presented a study in a session at American Heart Association Scientific Sessions 2020: A Virtual Experience, which reported COVID-19 CVD RegistryTM powered by Get With the guidelines. Objective of the registry was to accelerate the pace of COVID-19 CVD research and quality management, granular data collection and complete case capture from beginning of pandemic. Advantages were shortened time to discovery and dissemination of results, lower cost/higher yield approach to knowledge acquisition and dissemination, and leverage talent and energy of a larger number of investigators. Challenges were need to maintain rigor despite less central control of research processes, unprecedented pace and clinical priorities at enrolling sites.

Results: In hospital mortality shows 10% cardiac cause of death, 72% respiratory cause of death and 18% other cause of death. Almost 30% of non-cardiac complications were observed in ICU and more than 20% required mechanical ventilation and 4% required new dialysis/CRRT. Almost 20% died or were referred for hospital. Composite CVD was reported in 8.8%, MI, stroke, DVT/PE reported in <5%.

Pandemic has driven disruptive innovation to registry research COVID-19 admissions with high prevalence of CVD risk factors and prevalent CVD. A cardiovascular complication is an important subset, but less common than initially feared.

In a large national registry of COVID-19 hospitalizations, black and Hispanic patients accounted for over 50% of the hospitalizations and death. After adjusting for sociodemographic, clinical and presentation features, mortality and major adverse cardiovascular or cerebrovascular events did not differ by race/ethnicity. Asian patients had the highest cardiorespiratory disease severity at presentation.

Impact of Cardiovascular Disease on Outcomes among Hospitalized COVID-19 Patient: Results From >28,000 Patients Across the Unites States

1 in 5 patients hospitalized with COVID-19 die. Risk factors of age, male sex, and comorbidities increase mortality risk in n national database of hospitalized COVID-19 patients. No difference in outcome by race after hospitalization. Complication was rare, but when occur are often fatal.

Vardeny O, presented a study in a session at American Heart Association Scientific Sessions 2020: A Virtual Experience, which hypothesized that high dose influenza vaccine would improve clinical outcomes in patients with high risk cardiovascular disease (CVD) compared to standard dose influenza vaccine. Primary outcome was included in all-cause mortality or cardiopulmonary hospitalization. Analysis of time to event between 14 days post vaccination and until July 31 of the vaccinating season, stratified by enrolling season, with robust variance estimated to account for the within-subject correlation across multiple seasons was included in secondary outcome. Target no of participants, n=9300. Almost 1296 were estimated numbers of primary events. Primary and secondary outcome high dose results were 10 rates and 47 rates reported for influenza hospitalization and pneumonia hospitalization. Standard dose results are 8 rates and 41 rates reported for influenza hospitalization and pneumonia hospitalization.

In a high-risk cardiovascular population, high dose trivalent influenza vaccine was not better than standard-dose quadrivalent vaccine in reducing all-cause death or hospitalizations for cardiac or pulmonary causes. No differences were reported between vaccine groups in the secondary endpoints, including a traditional intent-to-treat analysis, and in pre-specified subgroups. High dose vaccine let to a modestly higher frequency of vaccination related adverse effects compared with standard dose vaccine, with infrequent and similar severe adverse reactions in both groups. While influenza illness was not captured systematically, hospitalizations ascribed to influenza were few and not different. 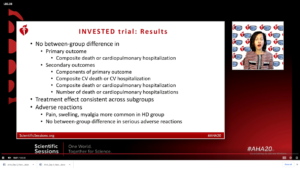 How Inflammation in CVD Works: An Overview of the Immunologic Effectors that Drive Vascular and Cardiac Inflammation 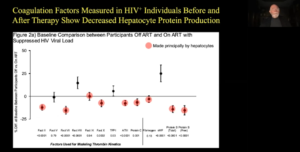 Antigens are classically oxidized LDL and it has native LDL and apoB-derived peptides. They are particularly interesting in light of re-emphasis on TG-rich lipoproteins such as VLDL and chylomicron remnants. Many pathways linked with inflammation and atherosclerosis are innate immunity or adaptive auto immunity, chronic infections, leaky gut and low grade endotoxemia, cellular senescence, etc. With so many pathways, cells, molecules it is difficult to focus. Tracy RP, presented a study in a session at American Heart Association Scientific Sessions 2020: A Virtual Experience, which conceptualized atherosclerosis as a life-long process and focus on pathophysiology that plays out over the lifespan in thrombin generation, chronic infection and adiposity. Coagulation factors measured in HIV+ individuals before and after therapy showed decreased hepatocyte protein production. The thrombin generation in untreated people was higher than the people with ART treated. After 6 months of treatment of ART, the thrombin generation was high in untreated people. The same results were seen after stopping ART for 2 months. Recent studies have demonstrated that the innate immune system can adopt a long-term memory (trained immunity) after a previous encounter with a stimulus, resulting in an increased response upon secondary stimulation. Monocytes from patients with atherosclerosis have a trained immune phenotype. Even early in childhood, adiposity is associated with unfavorable concentrations of hemostatic factors that are in turn implicated in cardiovascular morbidity and mortality later in life. For the initiating inflammatory stimulator, possibly it should be thought of as a parallel process, not a serial process. Many small contributions from multiple pathways, slowly build over time and interact with one another. Wound healing stimulators generated coagulation and innate immunity leads to atherosclerotic plaque and rupture when there is sufficient OXLDL. Adaptive immune stimulators cause additional Th1 response and naïve T cells become effector T cells with increasing immunosenescene.

Increasing utilization of adaptive immunity leads to immunosenescene and increased effector, memory population. This happens rapidly in HIV+ people, but occurs at some rate in all people.

Why Some Anti-inflammatory Therapies Work and Some Don’t: making sense of CANTOS, CIRT and COLCOT 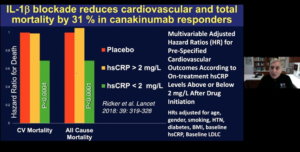 The 150 mg group met multiplicity adjusted thresholds for formal statistical significance for both the primary and secondary cardiovascular endpoints with 39% reduction in hsCRP and 15% reduction in MACE. However, no change in LDLC was seen. IL-1β blockade reduces cardiovascular and total mortality by 31% in canakinumab responders. CIRT evaluated in a randomized, double blind, placebo-controlled trial whether low dose methotrexate given at a target dose of 15 to 20 mg po weekly reduces rate of myocardial infarction, stroke or CV death among patients with stable coronary artery disease and either type 2 diabetes or metabolic syndrome. In primary cardiovascular endpoints, IL-1β, IL-6 and hsCRP showed no significance reductions while no change occurred in LDLC.  CANTOS trial showed significant reduction in IL-1β, IL-6 and hsCRP with 17% reduction in MACE. CIRT trial did not show anti-inflammatory effect and reduction in MACE with low dose Methotrexate. In COLCOT study, 4745 patients with post-myocardial infarction of ≤30 days were enrolled. Patients were randomized to Colchicine 0.5 mg and placebo daily. Colchicine showed significant reduction in CV death, resuscitated cardiac arrest, MI, stroke, urgent hospitalization for angina. Residual inflammatory risk was associated with interleukin-18 and interleukin-6 after successful interleukin-1β inhibition with canakinumab.

Antigen and Immune response in Cardiovascular Disease: Implications for Prevention, Diagnosis and Therapy 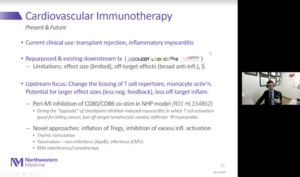 Current clinical therapy should be transplant rejection. Many trials demonstrated contexts but with limited effect size. The upstream focus is on change of T cell repertoire biasing, monocyte activation. There should be potential for larger effect sizes and less off target inflammation. Novel approaches are inflation in Tregs and inhibition of excess inflammatory activation.

Mankad R, presented a study in a session at American Heart Association Scientific Sessions 2020: A Virtual Experience, which reviewed the epidemiology of CVD morbidity and mortality in rheumatologic conditions and discussed approach to CVD risk and its prevention in the rheumatologic patient. Rheumatologic conditions such as rheumatoid arthritis, systemic lupus erythematosus, systemic sclerosis, psoriatic sclerosis, ankylosing spondylitis and Sjogrens increased cardiovascular morbidity and mortality. Patient with rheumatoid arthritis (RA) showed high risk of MI, stroke and CV related death as compared to patients without RA. Patient with RA died earlier than non-RA patients with cardiovascular disease. The mortality rate was higher with CVD. Lupus affects younger patients, and women primarily. Early death and infection was greatly associated with active SLE otherwise, later deaths were highly correlated with heart disease and other diseases. The prevalence of MI, Angina and peripheral vascular disease was 10% in Toronto lupus cohort, 6.7% in Pittsburgh cohort and 8.3% in johns Hopkins systemic lupus erythematosus (SLE) cohort. Mean age of patient at 1st event was 48-49 years and pre-menopausal women showed highest risk. In scleroderma, peripheral arterial hypertension was the highest risk factor showed least survival of patient than other disease such as lung involvement. The cumulative incidence of myocardial infarction and stroke in systemic sclerosis (Ssc) was significantly higher than non-SSc individuals. The risk factors of MACE in psoriasis were myocardial infarction and stroke than CV death. RA increased the risk of ischemic heart disease (IHD). IHD precedes RA and is often silent. RA patients not less likely to undergo acute perfusion therapy or to be prescribed CV meds. RA patients suffer higher risk of HF and death after MI. The traditional risk factors for SLE are male gender, high blood pressure and diabetes. Inflammatory diseases (RA, SLE, psoriasis, HIV) with other conditions significantly increased the risk of atherosclerotic CVD.

Patients with autoimmune inflammatory condition showed high index of suspicion for atherosclerotic CV disease. Preventive strategies are ASCVD risk tool with the discussion of presence of risk enhancers. The quiescence of inflammation, traditional risk factors should be reviewed and the treatment approach should be more aggressive such as lifestyle modifications, antihypertensive and statins.

Anti-inflammatory Therapies for Treatment of Heart Failure: Promising Future of a Lost cause

Abbate A, presented a study in a session at American Heart Association Scientific Sessions 2020: A Virtual Experience, which discussed the recent anti-inflammatory therapies for the treatment of heart failure. Patients with cardiovascular risk factors and abnormal inflammatory biomarkers are at increased risk of developing HF. Patients with HF and systemic inflammation have worse outcomes and who show resolving inflammation had better prognosis. In HF patient, inflammation amplifies the injury and worsens the cardiomyopathy while in other types autoimmune response with autoimmune trigger (i.e. virus) also causes cardiomyopathy. Inflammatory response exacerbates even in the case of extra cardiac injury (sepsis), which causes cardiomyopathy in this cytokine mediated cardiac dysfunction. Initially attempts for anti-inflammatory treatments in HF included prednisone which is the glucocorticoids commonly used drug to treat HF based on anecdotal reports of improvements. In ACCLAIM trial, a non-specific immunomodulation therapy (IMT) was based on injection in the muscle of white blood cells rendered apoptotic by oxidative stress in a device. Based on a pilot phase II study which showed that IMT did not improve 6MWT or LVEF or reduce CRP but was associated with reduce mortality. In ATTACH trial, TNF-α inhibitor Infliximab showed significant outcome with reduction of events in HF patients However, Infliximab failed to show effects on inflammatory markers and its high dose was considered harmful. In RENEWAL study, Etanercept failed to show benefits in event free survival in HF patients and no data provided regarding IL-6 and CRP. A pilot study on 18 NYHA II patients showed a modest reduction in IL-6 levels. Anti-inflammatory therapy with Canakinumab was associated with a dose dependent reduction in HF hospitalization or HF related death and significant reduction in IL-6/CRP. In one study, Anakinra significantly reduced AUC for CRP at 14 days and reduced new onset HF and HF hospitalizations while in another study, Anakinra group showed significant improvement in peak VO2 and VE/Vo2.

The evidence linking inflammation to the incidence of heart failure and HF complications is overwhelming and continues to accumulate. The intersection between inflammation and heart failure is however being complex, and the approach needs to be contextualized and tailored to the disease process. Non-targeted therapies have generally failed. The results of targets IL-1 blockers are promising for this class of drug and it is also encouraging. Future studies should therefore have clear therapeutic target and be able to demonstrate the anti-inflammatory effect.