A measured 50% of the general population will have a syncopal incident, most commonly brought with vasovagal reflex. However, the advantage of cardiac pacing in patients with severe recurrent reflex syncope and asystole generated with tilt testing has not been demonstrated. The usefulness of tilt-table analysis to select candidates for cardiac pacing is contentious. Pacemakers with rate-responsive closed loop stimulation (CLS) system continuously examine trends of right ventricular intracardiac impedance to collect information about speed of myocardial contraction and adjust pacing rate correspondingly in systolic phases. Recently, pacemakers with CLS showed the capability to begin a rapid pacing rate in acute tilt testing studies at the time of impending tilt-induced syncope. This early pacemaker response partially endured cardiac output and blood pressure, inhibiting or delaying cardio inhibitory vasovagal syncope regardless of a concomitant vasodepressor component. Thus, Brignole M, et al., conducted a study to analyse the effectiveness of dual-chamber pacing with CLS in inhibiting syncopal recurrences than inactive pacemaker implantation in tilt-induced cardio inhibitory reflex syncope.

128 Patients aged 40 years or older, mean age was 63± 12 years and 65% were male, suffered from at least two episodes of unpredictable severe reflex syncope in the last year and who had syncope with an asystolic pause of >3 s using tilt testing were included in the study. All patients gone through the implantation of a dual-chamber pacemaker with rate-responsive CLS attribute. 127 patients were randomly allocated to the active pacing arm (n=63) or to the control arm (n = 64) and were incorporated in the final examination. The patients were followed up quarterly for 24 months or prior to the incidence of the first syncopal relapse following implantation. The primary endpoint was the time to the first post-randomization recurrence of a syncopal episode. The secondary endpoint was the first recurrence of syncope or presyncope whichever came first. 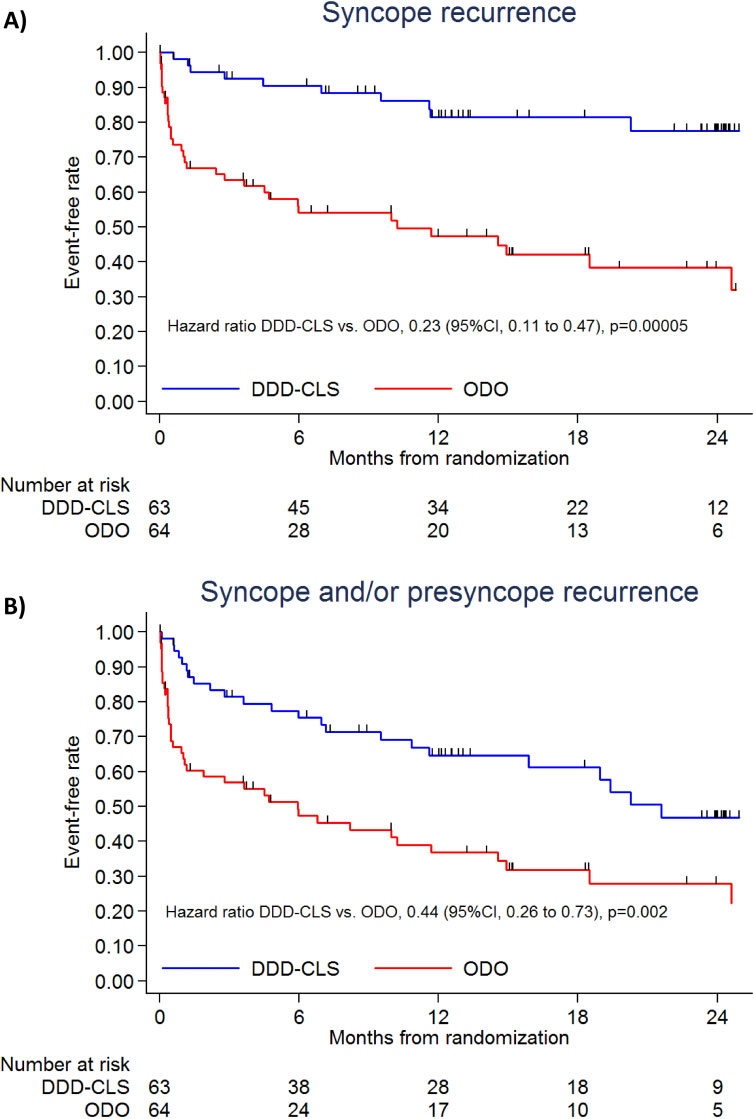 Figure: Kaplan–Meier curves comparing survival free of symptoms. (A) Primary endpoint and (B) combined endpoint of syncope or presyncope. 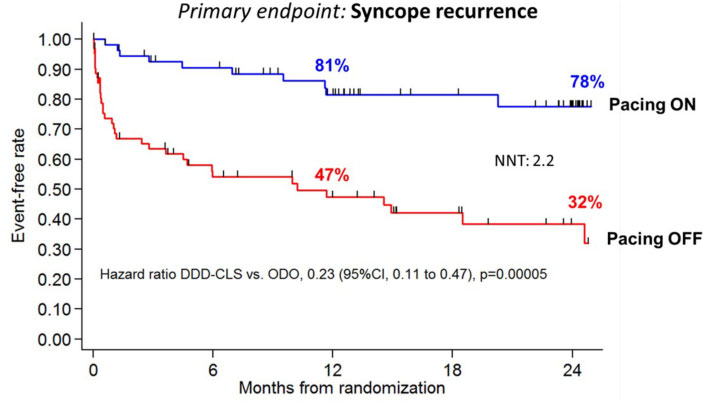 Thus, it was concluded that dual chamber pacemaker with CLS is highly effective in decreasing the recurrences of syncope in patients aged 40 years or older, suffered from severe recurrent reflex syncope and tilt-induced asystole. The data support the inclusion of tilt testing as a beneficial procedure to select candidates for cardiac pacing.