Genetic risk scores illustrate a procedure of summating a person’s genetic propensity for a given phenotype, and have accumulated interest for their prospective to enhance risk prediction in many common disorders. An early attempts at with a GRS for ischemic stroke exhibited limited predictive ability, regardless of promise in other conditions, possibly because of the little number of stroke susceptibility loci recognised and the biologic heterogeneity of ischemic stroke. Thus, Marston NA, et al., conducted a study to analyse whether a GRS could recognise patients at greater risk for ischemic stroke following accounting for traditional clinical risk factors in five trials over the spectrum of cardiometabolic disorder. The level of risk was estimated and conferred by each genetic risk tertile, high genetic risk compared the magnitude of risk to well-established clinical risk factors, and analysed the GRS performance over key subgroups. Lastly, whether genetic risk classification could refine stroke risk prediction in patients with atrial fibrillation was explored, with particular attention to those with lower CHA2DS2-VASc scores in whom high genetic risk might notify the decision about beginning anticoagulation.

A genetic cohort evaluation was executed with pooling of individual patient-level data from five cardiovascular clinical trials: ENGAGE AF-TIMI 48, SOLID-TIMI 52, SAVOR-TIMI 53, PEGASUS-TIMI 54, and FOURIER. All patients were given written informed consent. A set of 32 SNPs correlated with ischemic stroke was used to estimate a GRS in each patient and recognise tertiles of genetic risk. Hazard ratios for ischemic stroke over genetic risk groups were estimated using a cox model, adjusted for clinical risk factors. 51,288 patients were eligible to be incorporated in this evaluation over the five trials studied. The average age of the study population was 65.9 years, and 28.3% were female. Most patients (81.7%) showed coronary or peripheral artery disease. Many patients showed traditional clinical risk factors for stroke, including hypertension (82.3%), hyperlipidemia (60.2%), and diabetes (41.9%). A smaller percentage of the group showed prior transient ischemic attack or stroke (14.0%), were current smokers (18.2%), showed atrial fibrillation (28.4%), or showed a history of congestive heart failure (29.1%). A total of 960 patients exhibited an ischemic stroke across a median follow up of 2.5 years. 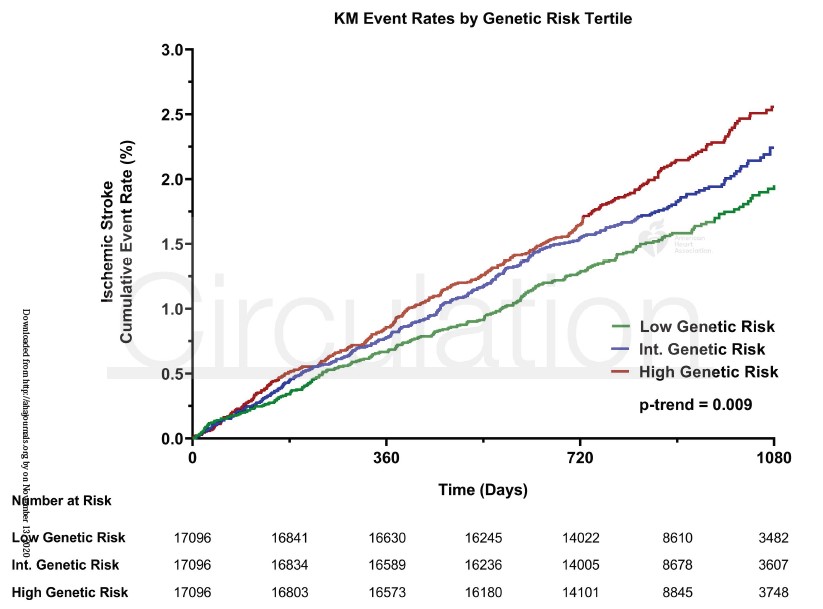 Between atrial fibrillation group, patients with lower CHA2DS2-VASc of 2 scores showed substantially higher predictive ability of the GRS (p-trend=0.04), including a 4-fold increased risk of stroke and absolute risk equivalent to those with CHA2DS2-VASc of 3 (HR 3.97 (95% CI 1.04-15.2), Figure 3). 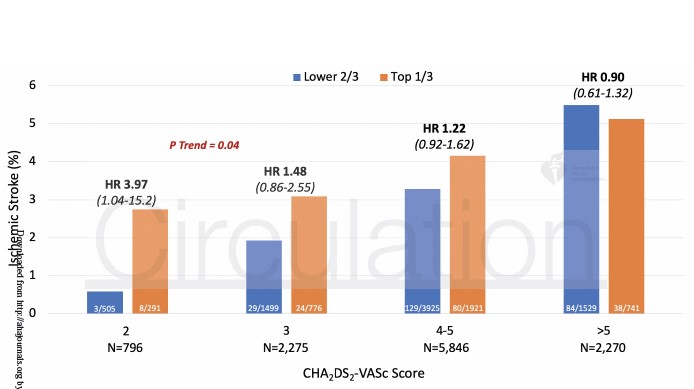