In patients with T2D with or without a prior history of HF or CVD, SGLT2i inhibit HHF and new data exhibit that they can inhibit AF. To date, it is unknown whether such advantage detected in trials implements to clinical practice. Still, limited real-world studies yielded inconsistent results on the correlation among use of SGLT2i and rates of AF. Spontaneous reports of AE occupy large databases with clinically-relevant details appearing from clinical practice. Thus, Bonora BM, et al. conducted a study to analyse a large pharmacovigilance database to estimate the reporting frequency of SGLT2i with AF compared with other glucose-lowering medications and analysed the correlation among SGLT2i and AF in the FAERS.

The FAERS were obtained from 2014q1 to 2019q4 to compare AF reporting for SGLT-2i versus reports for other glucose lowering medications (ATC10 class). 2 groups of AE reports were selected in each examination: one listing SGLT2i as suspect or concomitant (active treatment group) and the other listing any other diabetes medication as suspect or concomitant (control treatment group). A series of exclusions were used to analyse robustness of the findings and whether typical confounders of pharmacovigilance evaluation may have biased results. Several exclusions were consecutively applied for: concomitant medications; diabetes, cardiovascular or renal disease indication; reports for competing adverse events (genitourinary tract infections, ketoacidosis, Fournier’s gangrene, amputation). A descriptive statistics and measured PRR were yielded.

Figure 1: Study flow chart. A series of interconnected analyses is reported, with progressive exclusions Numbers are referred to the total number or reports in each analysis (*with the diabetes indication)

In both groups of reports, more than 50% of patients were aged 65 years or older, however patients on SGLT2i were more frequently males as compared to those on other ATC-A10 class drugs. SGLT2i were considered primary suspect of the reported AE more commonly than other ATC-A10 class drugs (56.0% vs. 29.7%), which were more frequently listed as concomitant medications. The most common source were physicians or other health care professionals for both groups of reports, although about 30% of reports were filed by patients (Figure 2). 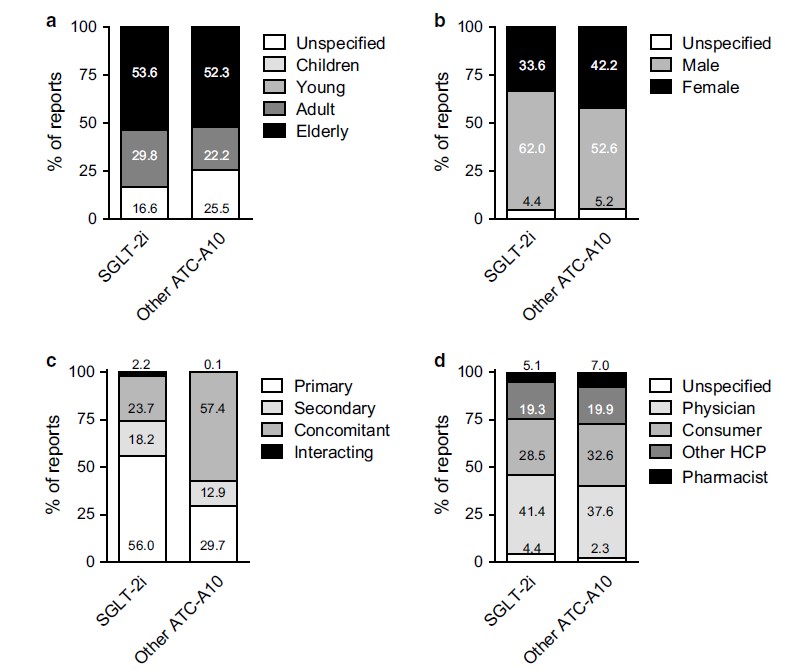 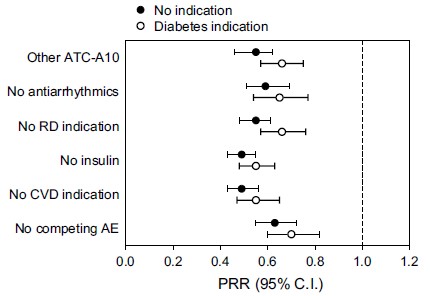 Results did not change significantly following exclusion of reports listing insulin (PRR 0.49) or anti-arrhythmics (PRR 0.59) as suspect or concomitant drugs, exclusion of reports with indications for cardiovascular disease (PRR 0.49) or renal disease (PRR 0.55), and those filed for competing adverse events (PRR 0.63). Results were always statistically substantial either the diabetes indication was described. Negative and positive controls confirmed internal validity of the database.

Thus, it was concluded that SGLT2i showed a compatible and strong decreased reporting of AF in the large pharmacovigilance database, hence adding further evidence regarding a real protective affect against AF. A dedicated prospective observational real-world studies are required to affirm distinct transferability to clinical practice considering all the evidence available and the limitations intrinsic to the approach. Furthermore, it is worth analysing whether SGLT2i can protect against AF also in patients without diabetes.