Hypercholesterolemia and hypertension normally coexist, serving as the prime alterable cardiovascular risk factors. In order to decrease the load of cardiovascular morbidity and mortality, an efficacious control of hypertension and dyslipidemia should be followed in clinical practice. The long-term advantageous impacts of statins on cardiovascular morbidity and mortality have been clearly showed and statin therapy is a cornerstone therapy of dyslipidemia. In several previous studies, statin therapy was correlated to lower BP values on hypertensive patients in addition with the reduction of blood cholesterol. But, most of these studies considered only office BP values with mixed consequences. But several confounding factors, such as the different antihypertensive drugs taken by patients influenced the relationship among ambulatory BP and statin treatment. Spannella F, et al., conducted a study to analyse the correlation among statin therapy and ambulatory BP control in a wide population of outpatients mentioned to hypertension centre. Also, a propensity score matching analysis was executed to decrease the effect of the possible confounding factors.

1827 consecutive outpatients were enrolled from January 2016 and December 2018 in a retrospective study. The inclusion criteria were as follows: essential hypertensive patients aged at least 18 years, a valid 24-h ambulatory blood pressure monitoring (ABPM), no changes in both antihypertensive and statin therapy in the previous 3 months. The following clinical parameters were analysed: patients’ medical history, laboratory measurements, anthropometric measurements, ABPM parameters and drug therapy. Three sequential oscillometric automatic BP measurements were performed on both arms concurrently with a validated device in the clinical visit. All patients with lipid-lowering therapy took their statin between 1800 and 2200 h. Antihypertensive treatment intensity (ATI) was determined to compare different drug correlations. A propensity score matching was used to compare two equally-sized groups of patients with similar characteristics as per the statin therapy. Matching was executed on log-transformed propensity score in a 1 :1 fashion with a caliper of 0.1, considering the different baseline characteristics among statin and no-statin group.

Thus, it was concluded that statin therapy is correlated with superior ambulatory BP control in essential hypertensive patients. The intensity of the antihypertensive therapy or the evaluation of various cofactors did not influence the consequence. 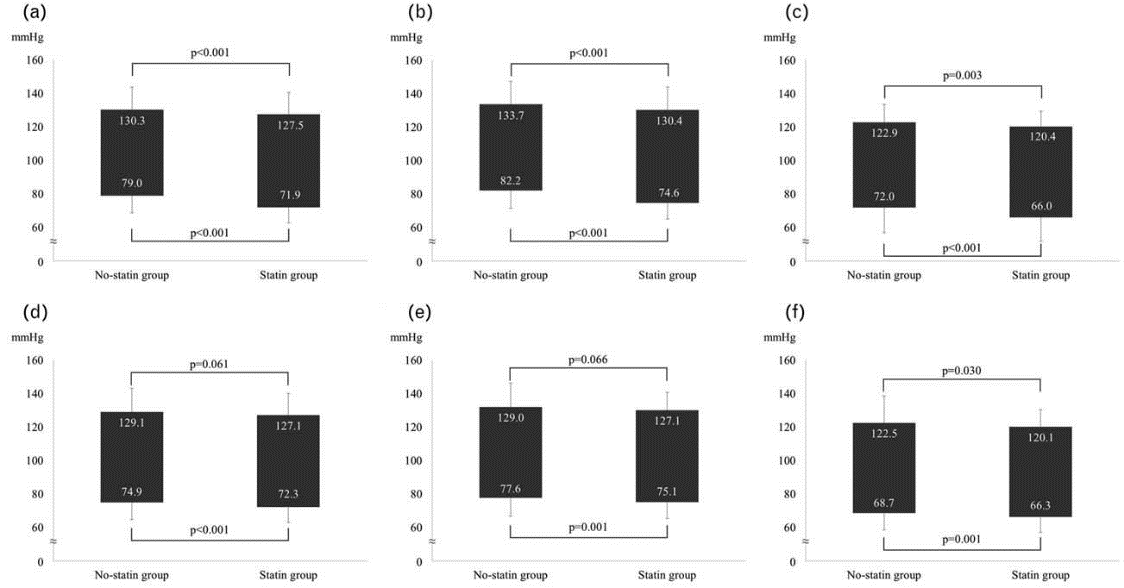