Patients with peripheral arterial disease (PAD) shows increased risk for cardiovascular morbidity and death. A mainstay of therapy to inhibit adverse outcomes is medical prevention with antithrombotic and statin treatments; though, patients with PAD are frequently undertreated with antiplatelets and lipid-lowering agents. Temporal data on PAD incidence, prevalence, treatment, and outcomes of PAD may aid the development of health care resources and quality of care, however these data are currently lacking for patients with symptomatic PAD following revascularization. Thus, Sogaard M, et al., conducted a study to explain the temporal changes in medical inhibition and adverse outcomes in a national group of patients with symptomatic PAD following revascularization.

33,381 patients were included in an observational cohort study from 2000 to 2016. Following exclusions, 32, 911 patients underwent a first surgical or endovascular revascularization because of symptomatic PAD. The mean age was 69 years and increased across time, as did the load of comorbidity. The temporal changes in the use of aspirin, clopidogrel, and statins and 1-year cause-specific hazard ratios for adverse clinical outcomes were assessed, following adjusting for procedure type, therapy indication, age, sex, and cardiovascular risk factors. The analyses were executed overall and within strata of index procedure (endovascular versus surgical), treatment indication, age, sex, and high-risk comorbidities. Study outcomes were the usage of medical prevention and the 1-year risk of adverse outcomes. Adverse outcomes incorporated major adverse cardiovascular events (MACEs; described as a composite end point of myocardial infarction (MI), ischemic stroke, and cardiovascular death), major adverse limb events (MALEs; described as a composite end point of major amputation and surgical revascularization), MI, ischemic stroke, major amputation (described as all amputations above the ankle), limb revascularization, major bleeding cardiovascular death, and all-cause death. In the 180 days after the index vascular intervention, aspirin and clopidogrel use was significantly increased between 2000-2004 and 2013 to 2016 resp., from 57.3% to 64.3% and 3.6% to 24.8% resp. New users exhibited a modest increase in the beginning of therapy. Statin use increased remarkably across the 2 first periods, from 2000-2004 to 2005-2008 (36.2% to 76.4%), ending at 77.1% in 2013 to 2016 (Figure 1).

Figure 1: Temporal changes in use of secondary prevention within 180 days after index revascularization 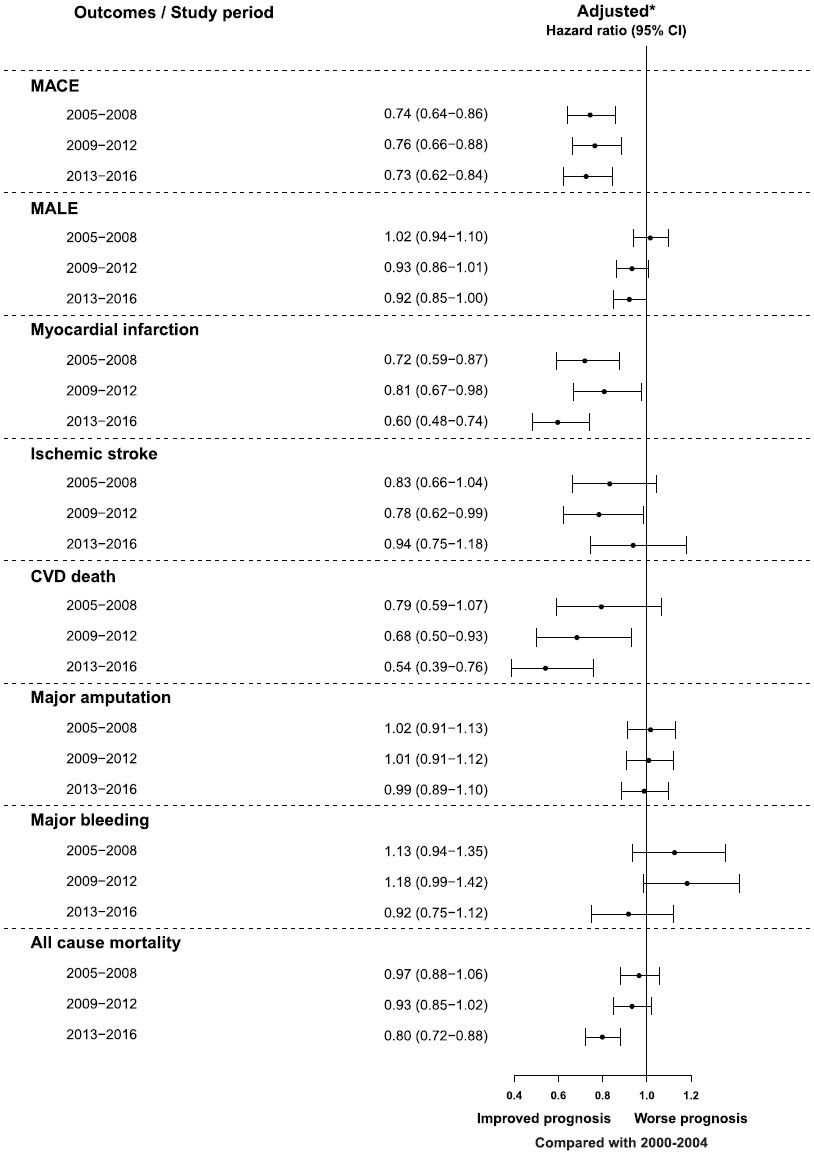 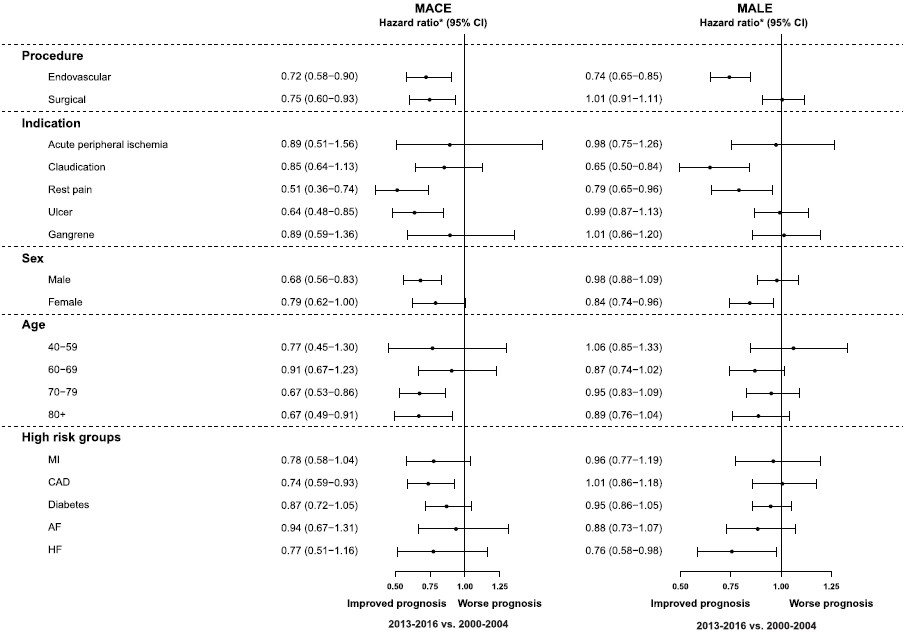 Figure 3: Adjusted hazard ratios for MACE and MALE comparing 2013 to 2016 versus 2000 to 2004 (reference), stratified by sex, age, and cardiovascular comorbidity

Thus, it was concluded that patients who underwent revascularization for symptomatic PAD showed substantial improvement in the medical prevention of adverse events across time. This increase was co-occurred with reductions in all adverse outcomes, excluding major amputations.